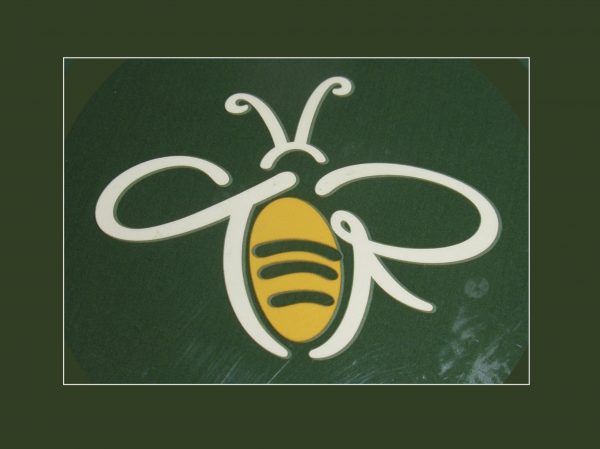 Saving the Honey Bees
The number of bee colonies has decreased to alarming numbers in the last decades. The main culprits are pesticides, poor nutrition, and parasites like the mite Varroa destructor that transmits other, even more problematic pathogens such as the deformed wing virus. How to save the bees is complicated because all these elements interact together to make the problem worst. For at least 10,000 years, humans have domesticated bees by creating artificial beehives to produce honey and other bee products. Now that the industry is in trouble, some investigators are turning to studying wild bees, hoping to find out how mother nature deals with the problem.
Some wild bees make their nests in cavities like hollow trees, where they live in small colonies coordinating their activities for the wellbeing of the whole colony. Another characteristic of wild bees is that they reproduce frequently through swarming; a great number of honey bees emigrate together with a queen to start a new colony elsewhere. Wild bees in small colonies swarm more often that large bee colonies. Research has shown that wild bees can coexist with mites in an host-parasite relationship by living in small cavities like hollow trees and swarming more often. These wild bees have less mite infestation and higher survival rate compared to large honey bee colonies. The future of the honey bee industry is taking notice and trying to learn as much as possible about the wild honey bee behavior, the environments where the honey bee thrives, and what makes them resilient to infestation.

Cancer and its microenvironment
The development and survival of a tumor depend on the cells and the elements that surround it; the stroma. There is sufficient evidence that chronic inflammatory processes can act as potent initiators of cancer. Inflammation is a normal process triggered in response to injury, radiation, chemicals, and pathogen invasion. These insults attract immune cells that secrete signaling molecules and reactive oxygen species that may damage DNA.  When the inflammation is not resolved and becomes chronic, several genetic and biochemical changes start to happen that may end up in cancer. In the first stage, the tissue enters metaplasia were genetic alterations and cell plasticity are engaged. During metaplasia, a tissue type is replaced by another tissue type not normally found at that location. For example, in injured esophagus, the epithelium changes from a flat squamous to a more cuboidal shape, the extracellular matrix is remodeled, and there is more extensive immune cell infiltration. These changes are to some extend protective but when present for longer period of time, they can promote progression to the next stage, dysplasia characterized by altered signaling. In addition to the already existing changes, there is fibroblast remodeling and endothelium displaying signs of pro-tumorigenic vasculature. The four and final stage is cancer where chromosomal alterations can be detected,  carcinoma associated fibroblast direct normal epithelial cells toward malignancy, and fibrosis become evident. Even though not all cancers develop this way, these types of cancer are associated with 20-25% of all cancer deaths worldwide.
In the last few years scientists have learned of the importance of the extracellular matrix and associated cells living around the cancer cells. This microenvironment is crucial for cancer cells survival and growth. New ideas about how to alter the tumor micro-environment, as an essential cancer component, is currently under intense study.

Evolution and Counter-evolution
The relationship between host and pathogen is one of peaks and valleys; an arms race where one species gets the upper hand only temporarily. The introduction of few European rabbits to Australia for sport turned into a problem when the rabbits procreated greatly, devastating crops, and becoming a pest. In order to control them, the authorities introduced rabbits infected with the virus myxoma and the rabbit population decreased by 95%. The problem of the voracious rabbit was also solved in France and in the UK by the same method. However, in all these places, the rabbit population recovered slowly with some rabbits being immune to the myxoma virus. Two questions arose; where in the rabbit genome are the changes that make the rabbits resistance to the myxoma virus, and are these genetic changes different in Australia, France, and the United Kingdom? To answer these questions researchers sequenced the DNA of rabbits pre-myxoma exposure from museum specimens and compared them to the DNA of todays’ rabbits. They focused on genes involved with immune system and found that about 50% of the genetic changes made in response to the virus where shared in the three locations. This surprising result is an example of parallel evolution. The gene with the most mutations codes for the protein interferon; a protein released by the immune cells to alert the presence of the virus.
The virus has also evolved into a more virulent form that suppress the rabbit’s immunity. The genetic changes in the virus DNA from these three locations are not in the same genes. Thus, parallel evolution has not happen in the virus case. These two organisms are locked in a host-pathogen relationship where one organism evolves a way to avoid the other, but counter-evolution brings the other back into the game. This is a beautiful example of natural selection acting on  a coevolutionary dynamics between the myxoma virus and the rabbit.

When animals appeared for the first time
It was thought that the rise of animals occurred during the Cambrian explosion between 540 – 520 million years ago (MYA). When researchers looked at the fossils around the geological line separating the pre-Cambrian from the Cambrian sediments, they found very little evidence of organisms before the Cambrian period. This picture has changed, we now have enough evidence that the rise of animals occurred in the pre-Cambrian, during the Ediacaran age. These results bring back the rise of animals to a time between 645 to 540 MYA. The first soft organic organisms were found in the Ediacara Hills in Australia but now there are many fossils from other places around the world that corroborate the observations. The most widely accepted soft body organism from the Ediacaran period is Dickinsonia. This organism was bilateral, and left trace fossil that is interpreted as mobility because as the organism moved, the underlying mat was disrupted. Other fossils include Cloudina the earliest animal with a skeleton (about 550 MYA), Charnia (about 570 MYA) anchored to the sea floor and perhaps absorbing nutrients from the surrounding water, and the earliest fossil Lantianella (about 610 MYA). Among these animals, biochemical evidence from Dickinsonia fossils show that this organism produces cholesteroids, a hallmark of animals. It awaits to see if other proposed animals shared the same and perhaps other animal biochemical signatures.
Fossils and geochemical evidence had allowed scientists to construct a picture of the conditions under which animals arose. The Ediacaran-Cambrian interval coincides with a series of dynamic global changes in the redox conditions, chemical element availability, and nutrient supply. These conditions may have enable events that promote evolutionary processes leading to the rise of animals. Carbon isotopes from Ediacaran rocks show that the carbon cycle was in fluctuation. In addition, Iron compounds in these rocks suggest that dissolved oxygen also fluctuated and reach a series of thresholds that could have allowed organisms to become more active and motile. These geochemical fluctuations seem to coincide, with the appearance of animals in the fossil record. The active research in this area is bound to produce more information on this interesting slice of time.

In the Scientific Press:Bird Evolution, Plastic pollution, Climate change, Biodiversity, What lies beneath Yellowstone, Microbial scent increases mosquito attraction
The Human Senses: HearingThe auditory system transforms sound waves into neural activity. All vertebrate auditory systems have commonalities as well as differences…..
Chemistry: The Elements ScandiumScandium is plentiful in outer space. The visible spectra of the Sun and certain other stars identified strong bands arising from this element…
The Human Senses: TouchLesson Plan: The sensory system has evolved to inform us about our surroundings. We can use touch to navigate in the world, to communicate, to search for food,…..
News: Sleep (Part 2)How does sleep impact memory and learning? Part 2 of our Sleep review centers on the restorative functions of sleep and the effects of lack of sleep.