LESSON PLAN: MIDDLE SCHOOL
All animals are the same but different
[ezcol_1quarter]Main Idea:[/ezcol_1quarter] [ezcol_3quarter_end] The Tree of Life represents the great diversity of organisms on Earth, and the idea that we all came from the same place (the trunk). Now that we have explored diversity, we are going to take a closer look at the common characteristics and how differences between organisms arise. [/ezcol_3quarter_end]

[ezcol_1quarter]Objectives:[/ezcol_1quarter] [ezcol_3quarter_end] 1. To be able to identify homologous structures in different animals.
2. To explain how small differences in common structures can, with time, lead to two different animals.
3. To verbalize what the role of DNA is in the appearance of differences between similar organisms.
4. To use organizers to make sense of the phrase “all animals are the same but different.”
[/ezcol_3quarter_end]

[ezcol_1quarter]Lesson:[/ezcol_1quarter] [ezcol_3quarter_end]1. Entry card: What do you think the phrase “all animals are the same but different” means? Allow time for the students to ponder and to write their responses. Lead the discussion toward the idea that at some levels all animals have something in common, like the vertebrae; and at different levels, there are differences, such as walking on four legs versus two legs.

2. Start by finding out about students’ prior knowledge of DNA, as well as any misconceptions or content gaps. Show the PowerPoint slide from the bacteria lesson plan, illustrating a eukaryote and a prokaryote cell side by side. Ask the students: What structures do you find in the nucleus? Where in the cell is the genetic information to make an organism? What do I mean by “genetic information”?

3. Point at the chromosomes on the board, and ask the students: What are the chromosomes made of? DNA. What is DNA made of? When you read DNA and get one piece of information about a trait, such as “make fur” or “make a tail,” what do you call this piece of DNA with instructions? Gene. Can someone define a gene? Once you know how much the students know, you can tailor the lesson better.

4. Ask the students to suggest an animal (a dinosaur is always good), and to call out loud some traits. Write the list of traits on the board in ONE continuous line (left to right). Make sure you cover basic traits such as body shape, number of limbs, etc. Ask the students: “When I read this list, what I am doing? I am describing an animal. I am actually reading the instructions to make a body, the body of a dinosaur. I am reading DNA in another language, English.” Emphasize that different animals would require different DNA instructions. However, because of common ancestry, animals share similarities, and the instructions for those characteristics would be the same. For example, all vertebrates would have the instruction “make a backbone.”

5. Let us look at several animals and find things that they have in common. Use a PowerPoint slide showing the picture of a bat, a bird, a lion, a horse, a frog, and a human. Remark that all these animals have a head, a back, four limbs, and eyes. Their basic body architecture is the same. The students’ task is to analyze them and to comment on the differences between the animals. Emphasize the dichotomy: commonalities versus differences.

6. Let students know that they are going to look at one structure more closely. In another PowerPoint slide, show the skeleton of the forelimbs for each animal side by side. Students need to observe carefully the structures, find the bones that are homologous or similar in all these animals, and group them together with a circle. The idea is to recognize the same bone in different animals, to think about whether their function is the same or not, and to suggest a reason.

7. Allow time before the class concludes to talk about the activity and what it means. Lead the discussion with a question like: If the genes’ instructions are to make fur, tail, or flippers, then would DNA instructions be a bit different for slightly different structures, like long arms and shorter arms?

8. Exit card: write two things you learned today, one thing you are confused about, and answer the question in the entry card again.

2. Homework:  In a few sentences, answer this question: If the genes’ instructions are to make fur, tail, or flippers, then would DNA instructions be a bit different for slightly different structures, like long arms and shorter arms? Hint: remember the discussion on “how to make a dinosaur.”[/ezcol_3quarter_end]

[ezcol_1quarter]Teacher’s Reflections[/ezcol_1quarter] [ezcol_3quarter_end]1. Things that I did not cover.
2. Did I meet the lesson objectives?
3. Comments, conclusions, and modifications.
4. Pedagogical value of the lesson. Did my students learn the concepts and ideas explored in this class? Did the assessments provide enough evidence of understanding?[/ezcol_3quarter_end]

[ezcol_1quarter]Notes to the Teacher[/ezcol_1quarter] [ezcol_3quarter_end]1.This class is very enjoyable to students because they can let their imaginations go. They generated a lot of questions and directed their learning into what they wanted to know. Thus, the teacher needs to provide close scaffolding so that the students’ inquires stay on target.

2. It is important that the teacher directs the discussion with well-thought-out questions to make sure that the students learn what they need to know; mainly, that on top of the underlying commonalities, there are differences, and that DNA, as the recipe, plays a crucial role. This idea is not exactly current because it ignores complexities (epigenetics). However, these issues may be discussed when the children reach the upper grades at school.

3. The PowerPoint slides can be put together by using resources from books or educational Web sites.

4. Teacher Reflection: This class went better than I thought. The students were absorbed in their work on the diagrams; they were on task, and interested in finding the differences between homologous structures in different animals. I thought that the idea of reading the DNA as a book was a very powerful way to explain how traits are determined. However, I was not sure the students got the concept at the beginning of class. The DNA instructions that describe how to make the limb of a lion versus the limb of a horse will be similar in general, but different in the details. As I went from table to table and checked students’ progress, helping with the task, answering questions, and asking questions, I got the feeling that the students were having fun. The picture showed the forelimbs of different extant animals, and asked students to find homologous or similar bones. They also had to analyze how the limb structure has changed from one animal to the next, and to hypothesize why. The students found the fact the bones of the lion and the horse are different, specially the paw, very interesting, and correctly inferred why they were different. I love this area of science, and maybe because I was excited, the students also were eager to find out more. They talked among themselves a lot, and this was good, because they were learning from each other. One student went out of his way, and on his own, to research the question, and expanded on what we did in class. Next day he got extra stars and a smiley face.

ACTIVITY: MIDDLE SCHOOL
Similarities and differences, all animals are the same but different

The Tree of Life represents the great diversity of organisms, while its trunk also reminds us that we came from the same place. Now that we have explored diversity, we are going to look more closely at the common characteristics and how, from these similar structures, differences arise.

Part I:
1. Your teacher will show you the pictures of a bat, a bird, a lion, a horse, a frog, and a human. All these animals have a head, a back, four limbs, and eyes, among other common traits or characteristics. This means that they all have the same body architecture. Your task is to analyze them and to comment about the differences among them. Fill the table below with ND if the structures are not different, VD if they are very different from each other, or SD if they are somewhat different. Then explain your answer in the space provided. 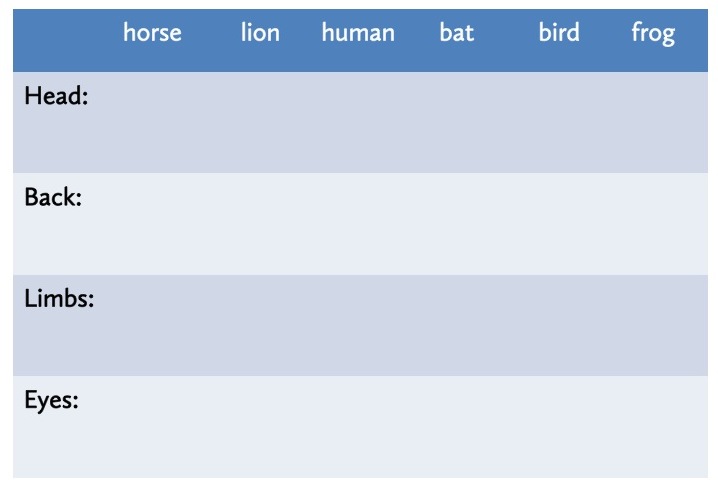 2. Let us look at one structure a bit more closely. You teacher is going to show you the skeleton of the forelimbs of these animals side by side. Your task is to find the bones that are homologous or similar in all these animals. What do you find interesting about this picture?

3. Pick two animals; for example, the lion and the horse, or the human and the bat. Observe, compare, and analyze the forelimbs of the two animals. Then, make a list of all differences and similarities that you can find. Fill in the diagram below. 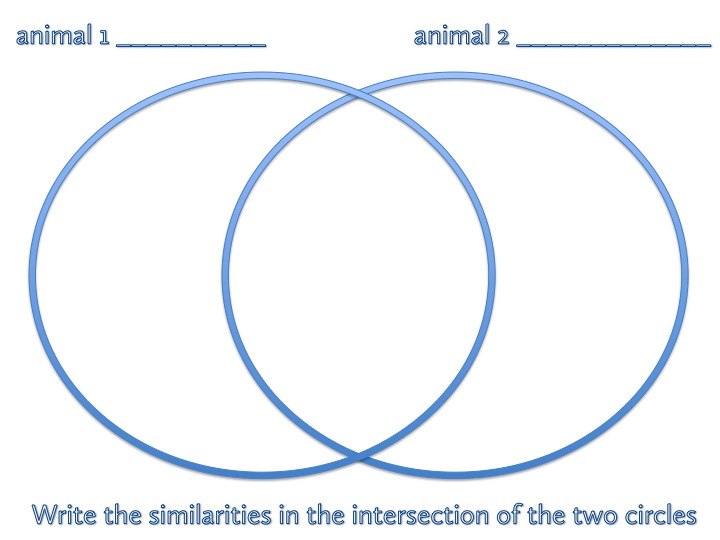 4. Think and explain why the forelimb from one animal is different to the next, and hypothesize why (hint: habitat).